According to the Department of Veterans Affairs, there are roughly 20 million U.S. Veterans in the United States. Chances are you know someone who has served, or maybe you, yourself have served. One way you can show your ultimate respect, patriotism, and support is with a military branch flag.

Flags can have many uses and meanings, but U.S. and military branch flags hold deep-rooted feelings of honor and respect for our country, our freedom and those who have given their lives to protect them. Because of this, there is an etiquette or code of behavior regarding how they are handled and displayed.

When displaying more than one military flag — for instance, from left to right if they’re on a stage or in a park — there might be some confusion as to which order in which to place them. Honor should be shown to each branch’s flag, of courage, but that order could be contested by whichever branch has the most members in attendance. While it would be nice to have a definitive answer, if there’s been a governmental decree on the order in which they should be placed, we can’t find it.

Many people believe that the order of the flags should follow the order of servicemen when in a similar line. This ensures the proper respect is given and provides a method for consistent display. From left to right, the most common order is:

The order in which servicemen are placed is described in a written directive established by the Department of Defense in 1977 and updated in 2003. The method they used for determining the order is based on seniority of the military branch by year of establishment.

What About the Coast Guard?

How to Display Other Flags with Military Branch Flags 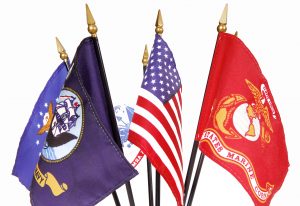 If you have several flags that you’d like to display, including U.S., military, and state flags, you might wonder what protocol to follow. There is a specific order of precedence that is used in all Government buildings, and that order should be used at your home as well.

United States Flag – The U.S. flag should always be the most prominent. It should be displayed at the top of a series of flags, or placed on its own.

State Flags – State flags are second in order, under the United States flag.

Military Branch Flags – Military flags are third in order, under state flags and the U.S. flag. As noted above, make sure multiple military flags are also placed in the correct order, starting with Army, Marine Corps, Navy and lastly, Air Force.

Other flags – Additional flags representing cities, schools or other organizations should be placed last, behind other flags

If you’re ready to show your patriotism and respect for those who have served, consider getting a military branch flag from ND Flag Pole Guy. Don’t have a pole? As our name implies, we can take care of that for you! Contact us today for more information.