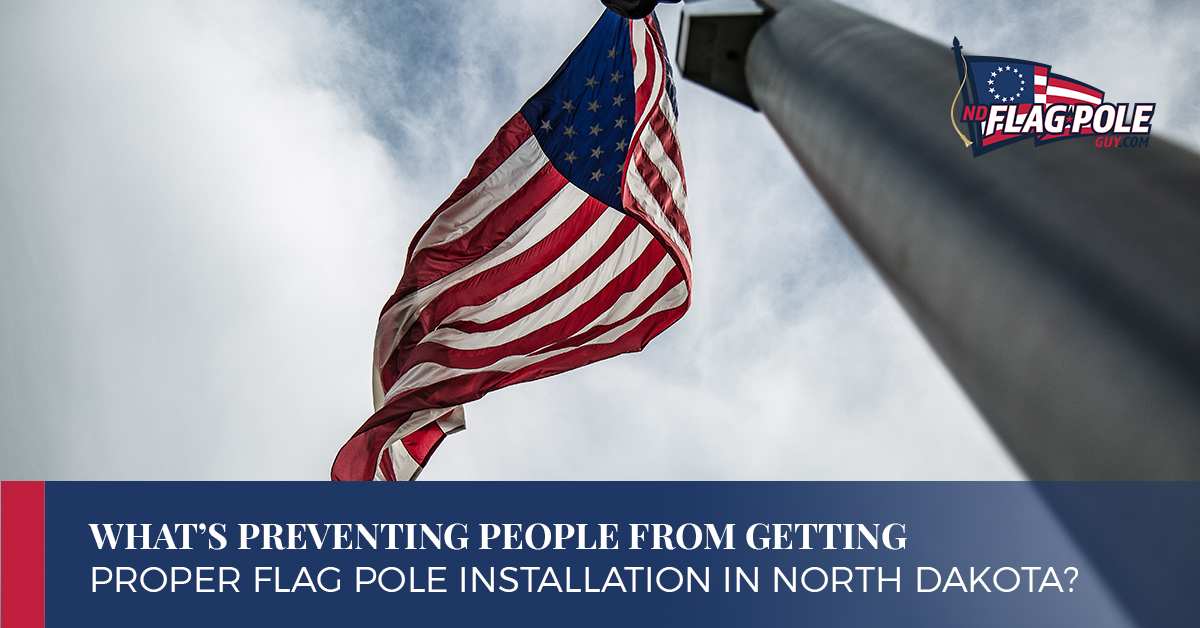 As North Dakota’s premier flag pole installation company, we travel the state putting up commercial and residential flag poles so that people can show their pride, whether it’s with an American flag that’s made in the USA or they want to draw attention to the POW/MIA cause.

We hear all the time that people are so glad that someone is finally offering such a service here in North Dakota for the right price, because so many people have every intention of installing a flag pole but then never go through with it. That’s why they’re so pleased that all it takes is one click to get a free quote for flag pole installation from NDFlagPoleGuy!

Here are the problems that we have decided to solve and how we can get the American flag flying proudly across North Dakota!

Some Buy A Flag Pole But Never Install It

It’s easy to order a flag pole online. Click “add to cart,” click “order,” and it arrives at your door a few days later. But then who’s going to install it? The people who order it have every intention to get it in the ground. But one weekend it’s too cold to pour concrete, then it’s too windy, then it’s vacation weekend, and before you know it the flag pole is in its box on the garage floor and covered by spare shingles and the sawhorses.

If you already have your flag pole, no problem. We can get it installed for you so that it will hold up to the strong winds we have here in North Dakota. We can even let you know if it’s the right size for the flag you want to fly, in case you want to sell the flag pole you already have and want to get a more appropriate one.

When you buy a flag pole online, you never really know of the quality that you’re getting. Perhaps the seller has so few complaints because they’re selling most of their flag poles to low-wind customers. That doesn’t mean they’re the best-quality flag poles.

But North Dakota has some of the strongest winds in the nation, which can tear apart a cheap flag pole. If the pole needs flag pole repair, we can handle that. But it might also need to be replaced completely.

The winds and cold temperatures don’t just affect the flag pole itself but the curing time of the concrete as well. Some people try to cut corners and install their flag pole in weak concrete, which eventually leads to problems. Because we install so many, we know exactly what a flag pole needs to support it in both the city and on the plains.

Some Have Simply Never Gotten Around To It

Sometimes people simply never get around to getting that flag pole installed. They might put it off because they don’t have the tools to install it, but that’s no problem because we’ll handle the flag pole installation as well as provide the made-in-the-USA flags to adorn it.

Let’s Get That Flag Flying!

NDFlagPoleGuy is ready to help you get your flag flying. Click here for a quote on flag poles and installation!