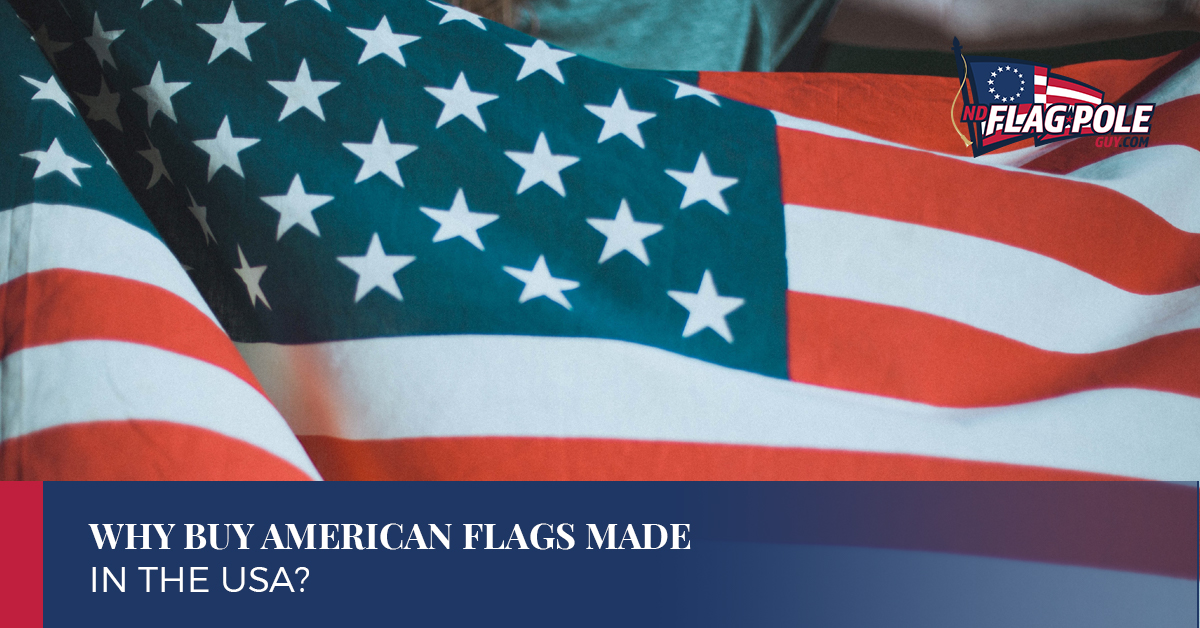 Take a look at the title of this article. At first, it might sound like a silly question. Of course you should buy American Flags made in the USA! It’s kind of a no-brainer, isn’t it?

Here’s the problem, though: American flags are made in foreign countries more often than you might think. It’s actually shocking, because of all things that should be made in the USA, the American flag should be at the top of the list. But if you head to the local big box store, you’re going to find American flags that aren’t made by Americans…and we think that’s a shame.

Of course, here in North Dakota we have fewer brick-and-mortar options of where to buy our flags. Many people turn to buying flags online, which is fine if it’s the only way you can get one made in America. But you have to be careful to verify that the flag you are buying was a flag made in the USA, whether you’re purchasing a military branch flag, state flag, or American flag. Far too many American companies are selling flags that aren’t made in America.

Buying a US flag that wasn’t made in America is not something you have to worry about here at ND Flag Pole Guy. In addition to offering flag pole installation to the patriotic citizens of North Dakota, we also ship our American-made flags to people across the nation. We’re proud of the fact that our American flags are made in America, though we honestly believe that that should be the default. Here’s why.

When we purchase our American flags in bulk, whether it’s the smallest 3-foot by 5-foot version or a gargantuan 30-foot by 60-foot, we are supporting an American company. By proxy, you are also supporting an American company. We think this is important to do, because by doing so that money is staying in America as the workers at the US-based American flag company spend it on other American services and products. It’s a great way to keep jobs in the country.

NDFlagPoleGuy.com hasn’t been around for long, but we have to admit that business has been good thanks to the pride North Dakotans show in the flag! When you purchase a flag or have flag pole installation performed, you’re directly supporting our American company, as well as a North Dakotan and a USMC veteran. Thank you!

Get a Higher Quality

We don’t have to tell you that North Dakota winds can be harsh. They’re some of the strongest winds in the country, and North Dakota is the fourth windiest state in the union. Flags that are flown are subjected to constant whipping, and that friction causes microscopic parts of the flag to fly off in the wind. And since non-lighted flags are only flown during the day, they’re subjected to UV radiation from the sun during the entire duration they’re flying.

Wear will happen to all flags, but when you when you buy an American-made flag it’s going to happen much more slowly. That’s because flags made in the USA tend to be made of a higher quality than those overseas. We say tend to because we have, unfortunately, run into some flags that aren’t as good as others. We researched our potential flag suppliers and tested many in order to find a polyester American flag that can stand up to the rigors of North Dakota weather. You’ll find the best US flags made in the USA right here.

A Flag Should Be Repairable

If you buy cheap American flags made in a foreign country from a big box store, you’re going to be replacing them constantly. Most of them sell nylon American flags, which are fine for the consumer who’s interested in flying their flag on holidays and might live in a neighborhood that doesn’t have much wind. But nylon flags are thin and wear out very quickly. Nylon flags aren’t the kind of American flag that should accompany flag pole installation. After all, every time a flag wears out you need to find the proper and honorable way to retire it. Going through five a year means that you’ll be flying a worn flag too often, and it’s a waste of money as well.

When it comes to a flag that will hold up, you need one that is designed to be repaired. That means that it’s reinforced at the corners before you get it, and is of a high-enough quality that the remaining material is strong enough to submit to repair. A lesser flag simply doesn’t have enough strength to accept repair; a strong flag will.

After your flag has flown for a time, it’s time for professional flag repair. That’s why you should buy a high-quality American-made flag the first time so that it can be repaired, a cost savings over the long run.

It’s okay to buy some things made overseas. Even if someone completely ignores the cheap plastic stuff from China, there are still some high-quality items that America simply doesn’t make. Other countries excel at certain technologies, while some products legally can’t be made in America. For instance, you can’t find a smartphone or digital camera that’s made in America. Want scotch or champagne? You must import them from Scotland or France if you want the authentic product.

As you can see, when you buy an American flag made in the USA, you’re not just supporting North Dakota’s Flag Pole Guy. You’re supporting American workers who made the flag, and you’ll be saving yourself money in the long run by getting a high-quality flag that doesn’t have to be replaced nearly as often. You’ll also be able to fly the flag with pride, knowing that your flag was made right where American flags should be: the good ol’ USA!

If you’re looking to buy high-quality American flags online, click here. If you don’t yet have a pole and are looking for sturdy flag pole installation in North Dakota, contact us for a free quote. We look forward to seeing your American-made Old Glory fly proudly!